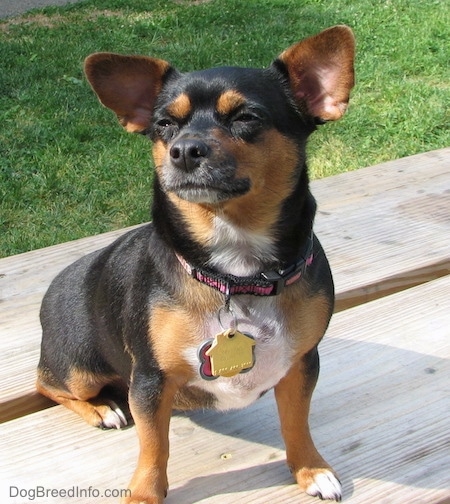 The Chiweenie is a cross between two popular breeds that are actually quite unique!

To learn more about the Chiweenie mix, let’s first try to understand its history.

History and original purpose of the Chiweenie

A Chiweenie is a cross between a purebred Chihuahua and a purebred Dachshund.

Both of these parent breeds have been around for quite some time. Bringing home a Chiweenie puppy? Then you have to check out these perfect Dachshund names.

But the Chiweenie is a much more recent creation that has become more popular since the 1990s.

Check out these other mini breeds

Chihuahuas became popular in the United States sometime in the 1800s.

The American Kennel Club (AKC) recognized the breed as a member of the toy group in 1904.

The Dachshund was recognised by the AKC a little later, in 1935.

This breed was originally used to hunt badgers, foxes, and rabbits.

However, the Dachshund and Chihuahua are both more commonly used as lap dogs these days.

This purpose is shared by the Chiweenie, who is loved as a lap dog by its owners!

Fun facts about the Chiweenie

Chiweenies are popular dogs that have taken the world by storm!

Their popularity is clear even on social media!

A Chiweenie named Tuna has over 2 million followers on Instagram!

Tuna even has his own website, and a blog of his latest travels!

Chiweenies are also sometimes called the Mexican Hotdog, by owners with a sense of humor!

There are hundreds of adorable pictures of Chiweenies online.

But you might have noticed each Chiweenie dog can look quite different from the next.

We must stress that predicting a hybrid puppy’s exact appearance is impossible to do.

One thing that can be predicted, though, is that the puppies will resemble one or both of their parent breeds.

Let’s take a look at what a Chiweenie generally looks like.

Based on the size of the Dachshund and Chihuahua, a Chiweenie will be a small dog.

Mini Chiweenies result from a normal-sized Chihuahua mating with a miniature Dachshund.

Their offspring may weigh anywhere from 3 to 11 pounds.

Teacup Chiweenies result from a teacup (unusually small) Chihuahua mating with a standard-sized Dachshund. Their puppies may weigh anywhere from 3 to 32 pounds.

This can seem like quite a big scale, but taking a look at the exact parent dogs used will give you a general idea of your Chiweenie’s adult size.

The same difficulty applies when predicting the height of your Chiweenie.

It’s appearance could be any combination of its parent breeds, including their heights.

A Chiweenie can measure up to 9 inches tall at the shoulder.

But obviously this may decrease if either parent breed is a miniature.

Miniature Dachsies typically mature to 6 inches at the shoulder, which is the same for standard Chihuahuas.

Their small size may be adorable, but it comes with some serious potential health implications, which we’ll look at in a bit.

Chiweenies may be solid-colored or bi-colored.

Both the Dachshund and the Chihuahua come in a wide variety of solid colors.

These include: black, chocolate, red, cream, fawn, and blue.

But they can also be a mixture of colors!

They could be black and silver, fawn and tan, blue and cream, and many more combinations.

Your Chiweenie’s parents are a good indicator of the colors it could inherit.

Due to the variation in their parents’ fur coats, Chiweenies may have a short or long coat that is smooth, course, or wirehaired.

Standard Chihuahuas have a short and smooth coat.

But Long Haired Chihuahuas have a much longer and shaggier coat.

Dachshunds may be smooth-haired (medium in length), longhaired, or wirehaired.

There is no easy way to tell which coat type a litter of pups will end up with before they arrive.

We’ll look at the maintenance of these different fur types a little later.

Since the Chiweenie is a mix of two pure breeds, we can only make an educated guess about his temperament.

This guess is based on the general temperament of his parents.

They are typically not good with small children.

But they’re very social and love spending time with their owners.

Let’s take a closer look at what instincts they might inherit from their parent breeds.

Dachshunds originated as hunting dogs, and Chihuahuas were bred for their devoted personality.

Therefore, Chiweenies can be feisty and occasionally snappy dogs.

They also tend to be bold and take-charge dogs.

Don’t expect to see a Chiweenie who is aloof when it comes to strangers being around “their” human!

If a Chiweenie takes after its Dachshund parent, she may also enjoy chasing after wildlife.

This can become problematic if you have other small pets in your home.

Dachshunds, a hound breed, are loud, and Chihuahuas are also known for their vocalization.

These tendencies for barking may exist in your Chiweenie mix.

This could be part of its natural guarding instincts and loyal tendencies, as Chiweenies are known to bark to announce the arrival of strangers.

If you are looking for a quieter dog, the Chiweenie might not be the one for you.

However, you can train your Chiweenie not to bark in some situations!

Chihuahuas are very loyal to their owners, so they are prone to aggression against strangers.

And Dachshunds tend to shy away from children.

Chiweenies can inherit these tendencies.

Aggression against strangers and children can make daily life with a Chiweenie difficult.

However, there are some ways we can try to minimise potential aggression.

Socialization is the most important way to help minimise potential aggression in your Chiweenie.

You should socialize your Chiweenie mix from the day you bring him home to try and alleviate this potential.

Socialization will help your Chiweenie feel confident in new situations, and can help avoid a fear-driven response.

Chiweenies can also be socialized to be more accepting of children.

However socialization must be started whilst your Chiweenie is as young as possible.

It’s important to remember that with any hybrid, the temperament of the dog may closely resemble one of its parents.

Or it may be a happy mix of the two.

Obedience training from a young age is often a must with Chiweenies, especially as they can be a little stubborn.

They may inherit some mannerisms from their parent breeds that aren’t too favorable to deal with.

As we mentioned earlier, Dachshunds were originally bred to be fearless hunting dogs.

This bold attitude that still resides in many a Dachsie may show itself in your Chiweenie attempting to take your place as the head of the household!

Especially if they do not like someone approaching their owner.

They typically need to be socialized to other people in order to keep this extreme loyalty at bay.